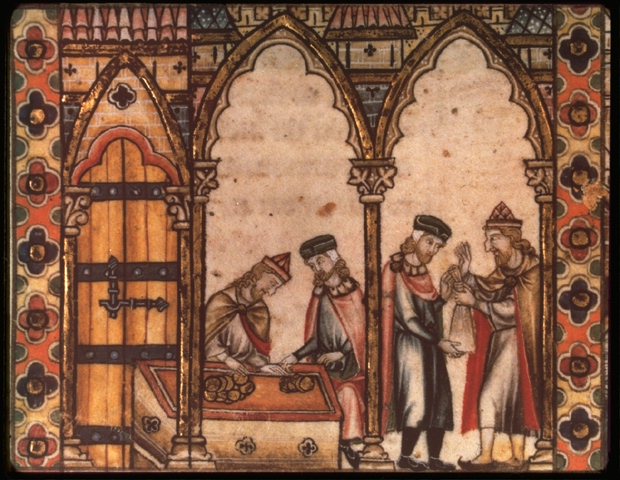 Dealing with coin has always been one of the most utilitarian exercises in any Dungeons & Dragons campaign. It is a necessary evil that all referees and players engage in to translate conquest into capital. It is also one of the facets of the game that most stretches the imagination and suspension of disbelief, raising thorny questions like "why should all coins have a constant universal value across the entire expanse of the Known World?", "why are coins always evenly divisible into lesser or greater coinages?" or "why should these ancient coins from the dungeon still have currency back in the town?" The implication is that the fantasy setting has achieved what took Europe to the last years of the 20th century to figure out—a stable, universal currency system.

Of course, there are many different ways that game designers have tried to complicate the picture. Medieval fantasy markets might be tempered by inflation tables, availability charts or conversion rates. A referee might declare that each kingdom has its own coin mint and may not accept coinage from opposing lands. Applying any of these methods in an actual campaign quickly proves both highly complex and ultimately ineffective. It misses the point, after all. We are still dealing with the unholy triumvirate: Copper, Silver and Gold pieces. (Or is it the gruesome five: Copper, Silver, Electrum, Gold and Platinum?) No matter what additional layer of complexity you add to your campaign economy, you are still dealing with the universal basic building blocks of wealth, which convert dungeon triumphs to points of abstracted "cash" or "wealth."

In Minaria, everything works a little differently. You don't delve into the earth to plumb it for copper pieces and gold coins. Instead, you emerge (battered and shaken) with 1,350 coins from the lost Cisterian empire. Or perhaps you return from the Bugbear lair with the Duke's own personal treasure—some 560 shiny pieces of lucre. Here we find no generic points of wealth, but coinage with a story attached to it. As the greater part of Minarian society operates on barter, the heroes will need to find a buyer for their precious take, which is to say that the coins themselves do not necessarily hold inherent value as currency. Inn-keepers and armourers can do little with such moneys as they rarely take payments in specie, and flashing strange coinage around would likely raise the immediate and unwanted attention of the local Duke or Baron. Rather, the protagonists are well-advised to seek a local money-changer; someone who will buy the storied cache in exchange for credit in the local town, city or region. Once the heroes have successfully laundered their fortune, they will have full financing for their extravagant lifestyle and material acquisitions. For example, the players return with 800 tarnished silver coins of southern Kushite origin. After some negotiating, the major money-lender in the city agrees to purchase half of them for 220gp in credit, good throughout the province. This credit advance is probably in the form of some local currency (or perhaps a standing tab, or even an endorsed cheque)—a detail that is given a considerable amount of handwavium to gloss over the trivialities. Importantly, however, this credit does not carry over into different regions, meaning the protagonists would be wise to only sell what they need to of their hard-won treasure.

What does this actually do differently than the traditional copper piece, silver piece and gold piece system? Firstly, it introduces a level of mystery when the treasure chest is opened and the gleaming treasure trove is seen for the first time. Secondly, it further requires a little haggling when it comes time to pawn the riches off (which allows more referee control and even future adventures, if the party decides to sell the coins at a neighboring kingdom instead of locally). Thirdly, it gives each treasure a story of how it got there (and certainly the Baron will demand his coins back after the party recovers them from the sunken wreck). Finally, it ties wealth to the locale, without requiring the referee to adumbrate an entire global economy to explain why.
Posted by E at 9:51 PM