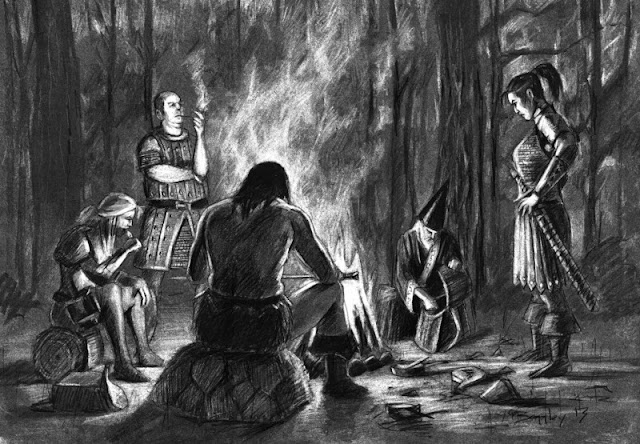 At my table, I have preferred a simple encumbrance system based on the ancient stone weight measurement, where one stone is equivalent to 14lbs. Recently I noticed that the Adventurer Conqueror King System also prefers measuring by stone (albeit at a slightly different conversion—the historical stone changed in value over time), which inspired me to flesh out my encumbrance system in more detail.

Like others before me, I prefer to keep a ratio of 1,000 coins to one stone, so that there are 72 coins per pound (incidentally, I do not use pounds for any measurements in the game). This is closer to ancient treasure caches like the Frome Hoard and steers clear of the implied chunky coins of Dungeons & Dragons. From this basis, I permit each character to lift up to their Strength characteristic in stones, which comports closely in effect to later editions of the game (so that an average Strength 11 allows one to carry 154 lbs). However, moving at any more than a shuffle requires that the carried weight also not exceed the character's Constitution (representing their stamina). Furthermore, acting carefully (such as climbing, walking along an edge or fighting) requires that the load also does not exceed the character's Dexterity. To maintain balance, the hero has the option to drop everything in hand or risk falling otherwise. Thus, a character with Strength 12, Constitution 9 and Dexterity 14 could carry 12 stones, but could only move normally if this burden was reduced to 9 stones (the lowest of Strength and Constitution). Likewise, the hero could only fight if the burden was 9 stones (as acting carefully takes the lowest of all three scores).

Within this system, I tend to handwave equipment weights. I generally rule that light adventuring gear (clothes, a bedroll, backpack, candle and so on) only weighs two stones, while more extensive gear (torches, iron spikes, rope and so on) would increase this to three stones. Each weapon and all of its ammunition (beyond a dagger) is one stone each, as is a shield. Armour is typically one (AC 8 to 7), two (AC 6 to 5) or three stones in weight (AC 4 to 3). As mentioned earlier, each bag of 1,000 coins is another stone of weight. Everything else is made up on the spot, perhaps using Vornheim's syllable-counting system for heavy items (i.e., a "chest of trea-sure" could be four stones).

Addendum: While developing the system I had informally used at my table, I noticed that these same rules might be used to cover something entirely different as well: the tense diplomacy and maneuvering of social interactions. Here, a player will make a reaction roll of 2d6, modified by any Charisma adjustment. The referee then listens to the player's attempt to roleplay the encounter and secretly rolls a polyhedral die based on the roleplaying and the hidden disposition of the other party (normally a d6, but this could be a d4 for an accommodating stranger or a d8 or worse for a hostile group). Adding this disposition die to the adjusted reaction roll, the referee compares the sum to the speaker's Charisma score: if the result does not exceed the score, the party is not immediately hostile. Then, if the player attempts to maneuver or trick the non-player characters, this same value is similarly compared to the Intelligence of the spokesperson to see if he or she gives away the ruse. Finally, if this sum also does not exceed the Wisdom of the speaker, the player can pick up some subtle hint in the opponent's speech that gives clues to something they did not intend to reveal (but only if the Charisma eased the first contact and the player did not fail an attempt to trick or deceive the opponents). In this way, such a tense encounter would be based on both the roleplaying attempt and the scores of the character, so that each party would have a spokesperson. At the same time, such encounters would always be a gamble because the players only had half of the information and the disposition die result that completed the negotiation score would be hidden.
Posted by E at 8:42 AM