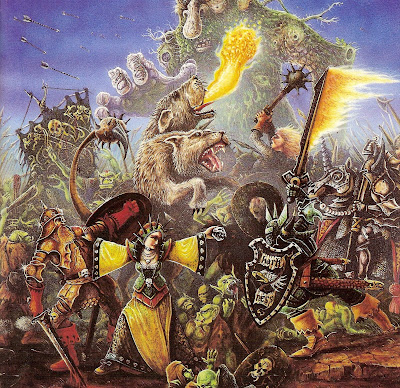 The High Elves: Sheltered away on a hidden island across the Great Western Ocean, High Elf society is divided into the arrogant nobles of the inner isle and their more practical Sea Elf kin, who ply the seas off the outer coast. The mercantile Sea Elves are the only natives of the Elven Kingdom, or Ulthuan in the Elven tongue, to regularly contact the Old World. With their marine battalions and nimble fleet, the Sea Elves jealously guard a monopoly of trade routes from Marienburg in the north to Tilea and Arabia in the South, while their aristocratic cousins content themselves with the occasional courtly duel or fueding skirmish in the island interior. The High Elf army is made up of warriors from both societies, and benefits from their different specialties. As the wealthy heirs of the High Elves disdain fighting on foot, the Elven

army boasts several elite cavalry regiments, as well as chariots and even squadrons of dragon riders. Elf commoners form archers, scouts and light infantry, while elite house guard provide heavy infantry. The Sea Elves provide mixed-rank regiments, which can fight with bow and melee weapons alike, as well as aerobatic wardancers and marine bolt-batteries (light ballistas). The High Elves have less access to skirmishers, largely preferring to fight in disciplined ranks, but make up for this with the sheer diversity in regiments. While the armies of Ulthuan will not stoop to hire mercenaries, they can call upon the Wood Elves to remake old alliances, and have access to hosts of monstrous creatures and ghostly apparitions from beyond time. The High Elf proficiency in magic also makes them flexible, as aeons of study has granted them limited insight into all the myriad types of sorcery.

The Empire: The oldest and most powerful human realm in the Old World, the Empire is even so crippled with useless and corrupt leaders, rivalrous petty counts and an ignorant and benighted peasantry. The soot-choked urban centers are the home to a rising wealthy merchant class and all manner of new inventions, but are also penetrated by secret societies, hidden cults and dangerous conspiracies. Due to both the darker dealings of the swelling cities and their air of innovation, Empire mages have considerable access to magic, and some even dally in the unspeakable arts. As a traditional late medieval society, the Empire is divided into those who work, those who fight and those who pray, except in a realm so beset by enemies on all fronts, in reality every segment of society—rich or poor—must be ready to fight. The innumerable odd faith denominations provide

powerful shock cavalry in the form of religious orders of templar knights as well as the uncontrollable mobs of frenzied and wild-eyed penitents, who scourge themselves into fevered rage in battle. The feudal lords call upon independent secular orders of elite knights and their own landed gentry for heavy cavalry and armoured footmen. Regular troops are also maintained in the standing armies of local barons and counts, including scouts, halberdiers, crossbowmen and arquebusiers, while peasant levies can be quickly raised to provide musters of pikemen, peasant mobs and hunters. For siege work, imperial ingenuity provides powerful cannon batteries to the noble that can afford them. Empire armies can call upon Halfings, Wood Elves and lesser Old Worlder principalities for allies. The latter can also be hired on as mercenaries, as can Dwarfs, Norse and Ogres. Imperial wizards can bind hosts of monstrous creatures, although demonic and undead summonings are forbidden by common law.

Bretonnia: West of the misty Grey Mountains is a land robed in fog and rain. The rural backwater realm there had risen at one point to the height of power, challenging even the iron and blood armies of the Empire. Corruption and decay have since seized the decadent courts of the Bretonnian king, leaving the rural nobles to look to the defense of their own estates as they are increasingly surrounded by growing darkness. Few liege lords care for the squalor of their people, who live in huddled villages nestled close under the walls of a feudal ruler. Unlike the neighboring Empire, Bretonnia has few cities, and those that do exist serve as the walled fortresses of great noble families. There is a noticeable lack of any burgeoning middle class, and fewer signs of organized religion—Bretonnian peasantry tending instead to superstition and countless folk practices that differ significantly in each further vale.

For centuries of rivalry and conflict, the nobility have mastered mounted combat and excel as knights of honour on the battlefield. Bretonnian armies thus have access to four types of heavy shock cavalry, as well as mounted men-at-arms for light cavalry. In the retinues of noble knights can be found footmen men-at-arms as well as city guards wielding polearms and crossbows, peasantry wielding bows and simple weapons and well-equipped brigands. When marching out on campaign, these infantry formations can be supported by a war altar, carrying the bones of heroes revered by Bretonnian superstition, and cannon batteries to make short work of enemy fortifications. Bretonnian generals can call on the support of Halfing and Wood Elf allies, as well as other Old Worlder nations. The latter might also be bought at a price as mercenaries, as may Dwarfs, Half Orcs, Norse and Ogres. The dark and unexplored wilds that envelop the scattered castle villages make a powerful resources for Bretonnian wizards, who have become adept at illusions and elemental magic, as well as binding monstrous hordes of giant frogs, leeches, snails and even the occasional dragon.

Stay tuned, the next article we will explore Chaos, the Skaven and Orcs & Goblins.
Posted by E at 8:30 PM 3 comments: 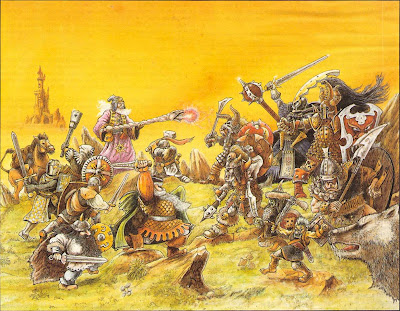 It is not quite spring, but I thought I might do a little spring cleaning around here. I have resettled to Boston and my interests have similarly been struck by wanderlust, migrating like nomads to fertile new territory once the mountain passes have thawed. In my ranging I have rediscovered Warhammer Fantasy Battle, and specifically the 3rd Edition (1987). In the growing old school wargaming renaissance scene, this version of the venerable grandfather of fantasy wargames is known as "Oldhammer." I quite approve.

Thus this blog has been repurposed, at least for the time being. I will still keep the old address from Swords of Minaria, but I thought it might be fun to give the page a new name and styling. The Border Princes, for those in the know, is an outlaw region beyond the pale of civilization: a no man's land well beyond the furthest frontier, where ignorant armies clash in the brutal wilderness in a vain effort to carve out a meek kingdom for a short while. If this sounds something like a roleplaying module you have played, then you would not be far from the truth. In reality, Warhammer Fantasy Battle 3rd Edition borrowed as much from roleplaying games as wargames, and was the only version of the game to date that was developed to be fully coterminous and complementary to a roleplaying game (the much lauded first edition of Warhammer Fantasy Roleplay). The things WFB3 has in common with an old school roleplaying game (not the least of which is the requirement of a gamemaster) are enough to term it a hybrid roleplaying-wargame, but the full extent of this is better tackled in a future post.

For the first article that explores the rules and roles in Oldhammer, I wanted to begin a "grande review" of the armies and factions of the Old World. Those who came to the game after the late 80's might be surprised at the sheer diversity of troops available to an aspiring general. The familiar armies are all there, including Dark Elves, Wood Elves, High Elves, the Empire, Bretonnia, Chaos, Skaven, Orcs and Goblins, Dwarfs, Slann and the Undead. Joining these are many other warbands of lesser races, including Chaos Dwarfs, Fimir, Old Worlders, Pygmies, Halflings, Zoats, Giants, Ogres, Half Orcs, Hobgoblins, mercenaries from Nippon and the Norse. This diversity in choice really comes into its own when one takes into consideration the rules for hosts, allies and mercenaries. Each main army can choose up two, three or even five factions as allies and/or mercenaries, making each force truly unique. These warbands are often further bolstered by hosts of monsters, ethereal spectres (including wraiths, wights and ghosts) and Chaotic creatures. Each army certainly has a unique feel, with strengths and weaknesses, but is also able to greatly tailor its strategy with these supporting forces. To get a better sense of this, we will take a closer look at the Dark Elf and Wood Elf forces.

The Dark Elves: The Dark Elves are a Chaotic and Evil race that hails from the bitter cold lands across the Great Western Ocean. Exiled to this harsh frontier millennia ago, the Dark Elves hate their Elf cousins (must always attack them, with +1 to hit and Leadership) and have spent time developing their sorcerous affinity for very powerful demonic and necromantic magic. With such close proximity to the Northern Chaos Wastes, Dark Elf characters and units suffer random chaotic mutations. Within their armies, Dark Elf generals can field assassins hidden in units and frenzied Witch Elves (+1 to hit, wound and save while going berserk). They may deploy an array of dangerous heavy and medium cavalry, including Helldrakes

and Doomdrakes (knights mounted on powerful reptiles), although their infantry is fairly standard rank and file, including crossbowmen (who have access to short range repeater crossbows), armoured warriors and scouts. They can gain further support from animal handlers (driving more dangerous reptiles into battle), repeating bolt throwers (essentially a weak ballista) and a war altar (which acts as a very powerful army banner). They can call on allies and mercenaries to gain access to cheap hordes of expendable troops (Hobgoblins, Nippon, Skaven and Undead) or powerful heavy infantry (Chaos, Fimir and Ogres). They have access to monstrous hosts (including more reptiles and a dragon), ethereals and Chaotic monsters (including Chimeras, Hydras, Jabberwocks and Manticores).

The Wood Elves: The Wood Elves are the scattered remnants of ancient Elven colonies in the Old World, dispersed among the many deep and unexplored forests of that land. They are natural pathfinders, moving through tangled woods with no difficulty, and have spent their time away from their progenitors mastering the longbow (firing to a distance of 36") and becoming adept at illusions and elemental magic. They have access to a limited amount of medium and light cavalry and chariots, which typically patrol the wild heaths at the edge of a woodland kingdom, as well as a dizzying array of missile troops (including armoured Guards, who protect the settlements; Lord's Bowmen, who are the best marksmen in an Elvenking's realm;

regular archer levies and Glade Runner scouts). The Wood Elves also march with lightly equipped warrior kinbands and are further supported by beastmasters, falconers, hidden shapechangers and acrobatic wardancers. While the Wood Elves do not have any artillery, they can rally mighty Treemen to their aid, who are more than a match for most giants. Their access to magical illusions and the great number of troops that may adopt a skirmisher formation (nearly all of their archers, the wardancers and even a unit of cavalry) means that Wood Elf armies can be very elusive on the battlefield. They can summon support from High Elves, Halflings and Zoats (adding to their missiles, magic and cavalry) and monstrous and ethereal hosts.

The next article will cover the armies of the High Elves, the Empire and Bretonnia.
Posted by E at 9:28 PM 15 comments: