Bonded to the World 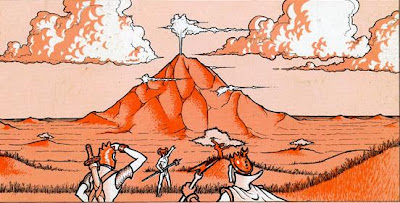 In many ways, how players are rewarded at the table will define your game, and thus your game world. After all, the world only comes to life in response to the players' action (or inaction), which is then driven by their goals. Rewards give the players an indication of what they should be doing, generally speaking. At the same time, rewards are much more than mere incentives, which would lead players along a predesigned course. Rather, how the players go about achieving these rewards is unique to each group and to each story, and thus rewards must be open-ended. As mentioned in the previous article, players should always be given problems, not answers. How they answer problems is an expression of their freedom within the game world, and is the very narrative of the story itself.

Perhaps a good example of this can be seen in "Old Geezer" Mike Monard's fascinating on-going "tell-all" about the early days of Dungeons & Dragons. As he describes, experience awarded for defeating monsters in the Greyhawk dungeon was almost nothing, perhaps only enough to round off the experience gained from treasure, and that in his own games he does not reward any experience for monsters. The picture that immediately forms is one in stark contrast to modern "dungeon delving" games, with the players cast as "amoral mercenaries out to loot the dungeon," as one commenter put it. Where there is no reward, there is no risk-reward structure, and thus monsters are carefully avoided, like elite soldiers sneaking deep behind enemy lines in some subterranean fantasy Vietnam. 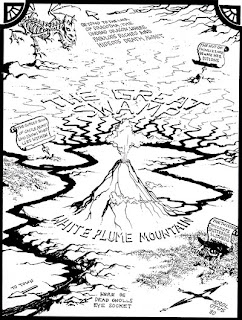 In the same way, a game that does not have a clearly identified reward structure is a game (and a game world) with an identity crisis. Without a framework of rewards (whether fame and fortune, or something else entirely), the players will not have a clear idea of what they should be doing. Without player action to fuel it, the world cannot come to life. This is probably one of the most discussed aspects of Dungeon World, still a work-in-progress, and several iterations of an "experience" system have been proposed (experience being one way to quantify reward).

One of the options that has gained the most traction, although not the current "official" solution, is Ryan Macklin's experiment. A hold-over from the primogenitor game Apocalypse World, this system has each player pick a basic strategy for another player to pursue that session (such as pulling stunts, defending others, acting diplomatically, solving possibles and so on). Each time the player acts accordingly, they earn experience, rewarding immediate and short term narrative styling. Thus, a Cleric (bidden to be more aggressive that session) will show a new angle to his character, as he beats the goblin he interrogates, or lashes out at his superiors in the monastery.

This is a fine system in itself, but perhaps more suited to the game it originated from (Apocalypse World is all about psychologically breaking characters down in a ruined world where no one is granted tomorrow). As forum-goer nemomeme points out, the reward structure determines what the very game is about. We must be careful to think about the essential design goals behind the game before tackling rewards.

So what is adventuring about? The very principles of Dungeon World (which make it so interesting and unique) demand that the fiction comes first. Like microgame adventures, the rules are discrete components that have specific triggers from the fiction, and are otherwise out of sight. The principles also state that the game is a conversation, so thus the rewards should also be in conversation. Perhaps a good model for reward, which is based on the fiction and also in constant conversation, would be Jeff Rient's article on "eXPloration".

Here, I can imagine players and referee discussing, as a group, what they want to do, as it comes up in the fiction. They could even create "experience ladders," listing some goals and objectives. Once players have achieved (or failed) all of their plans for a front (a living, breathing local situation), and the game master has no more moves to make, this should indicate that the front has been fully explored and the next expedition should be chartered. Each player might have a different list, but commonalities and overlaps are expected, as the party is acting within the same local area. An example might be: 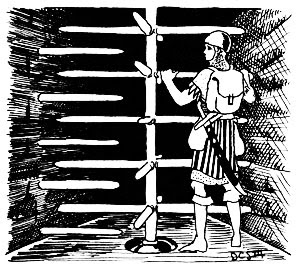 These goals are constantly being discussed, revised and traded as the fiction dictates, and represent paths of action parallel or tangential to the plot of the front. They give the players a clear idea of what this world is about (that is, the cool and amazing things to do and see, the supernatural adversity to overcome and the bonds to play off between players in the process). In fact, in many ways, this is merely an extension of the bonds rule from Dungeon World, which gives players an initial motivation before the first front is even encountered. Here, in addition to being bonded to each other, the players are bonded to the world. Most importantly, this method lets the fiction come first, which is an essential quality of Dungeon World, and a great deal of what makes it so unique.
Posted by E at 1:46 PM