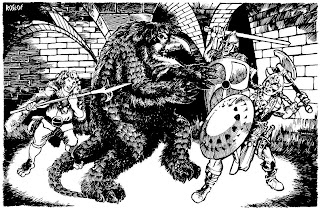 I wanted to expand a little on the previous discussion of campaign preparation. I do not believe a referee's preparation should look anything like a published adventure module, which were fixed and scripted scenarios developed specifically for the tournament milieu. These are, of course, fun to read for inspiration or to run the players through a "gauntlet" typical of gaming conventions. However, for home games, these adventures are far too scripted, and go against the basic principle that narration is neither controlled by referee nor by player (as discussed in the previous article).

Yet, it is imperative that the game world seems real and adventureful at every moment and in every scene. Some work must go into world creation, but this fashioning and shaping cannot have a stymying effect. The generative process must be continuous through the process of playing, so that the world comes alive and retains full fluidity. Player decisions, ever capricious, must remain meaningful.

Marshall Miller has given a good example of what this might look like for Dungeon World, a fan variant of Vincent Baker's Apocalypse World. That game already divides the environs of a game world into Fronts, which are living, breathing local situations that the players can get themselves mired in. Not only is a Front (e.g. the Caves of Chaos) a vivid and lush location to explore, but it is also an ambiguous, evil force to oppose the heroes, a ticking time bomb (with signs of the looming disaster), and a creature in and of itself (capable of executing its own moves and maneuvers against the players). A Front is a setting that truly comes to life, like the Mines of Moria, and opposes the heroes by its very nature. It must be carefully explored, discussed and negotiated by both the players and the referee alike, with the primary vehicle for this being dice rolls and decisions.

What Miller has added to this is the notion of the "Adventure Starter." This is another sort of environ in the game world, contained within a quick, flexible toolkit designed to spark the initial interest and action. An entire "Adventure Starter" environ consists in a reminder of the referee's guiding principles (make the world real, make it full of adventure etc), a list of scenic impressions to colour your descriptions and make the world real, some open-ended questions meant to both inspire sub-plots and to hook your players, a list of artifacts and creatures that might be of utility for the referee and finally a list of new moves open to the players while they explore the setting. Importantly, there are no maps, no pre-scripted story and no hard timelines. The referee could glance at the two-page setting and read as much or as little as he likes without missing anything important. 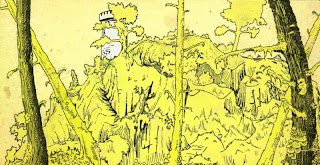 Both Fronts and Adventure Starters are an excellent way for a referee to prepare the environs and locales of the game world. They are inspirational and fluid, and may be used before and during the game to drive interesting scenes. At the same time, preparing this kind of gaming world is not about pre-establishing events, plots or geography. Those are answers, and the answers that the actual playing experience will give you are always better. Rather, the referee should start to think about preparing problems which do not necessarily have an answer… yet. Confronted with a living, dynamic and danger-filled world, the players' actions and words fill the adventure-engine that the referee has prepared, fueling gameplay that players can actually care about and feel.
Posted by E at 4:06 PM