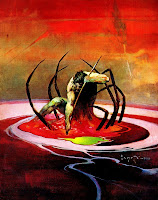 There is a nice effect that goes along with keeping monsters mechanically freeform. From planning to implementation in the campaign, such enemies remain open-ended in the minds of both the judge and the players. The unknown shifts from simply "what the players cannot see behind the judge's screen" to the unknowable, as it draws from the vague and unthought potential of the judge's ongoing process of imagination and reimagining. Such monsters are free to continually evolve with the world as it is explored by the players, and are infinitely malleable to the twists and turns of plot that are inspired during play.

Dungeon Crawl Classics supports this, and goes so far as to say that monsters and players are not equivalent, and that they do not play by the same rules. This is a refreshing break from other games that try to "stat-out" monsters in terms of player-centric mechanics (giving them levels, classes, feats, skills and so on). Instead of these constraints, monsters are completely unfettered by design limitations, and are freeform enough to allow the judge to continually present them in new and unexpected ways (this is also encouraged by Lamentations of the Flame Princess, I have heard).

Even on a small scale, it is nice to break the symmetry between players and monsters. In the spirit of Robin Law's innovative GUMSHOE system, I have been thinking of using more player-facing mechanics with my world. This sets up monsters and players not as equivalent pawns in a wargame, but rather monsters are just part of a rich environment that players must struggle against. By leaving monster ability and behavious nearly completely undefined, the game simply feels more narratively oriented.

As a concrete example of this, I am strongly considering dropping traditional initiative rolls in combat. The systems that we have come to recognize (group initiative or individual initiative, rolled at the beginning of combat or each new round) are simply not tied to the narrative of the battle at all. For the most part, they are highly random, disconnected from the actions of the combatants and (perhaps with the exception of group initiative) discouraging of cooperative actions. Instead, I am proposing that all combatants describe their actions at the beginning of the round and, if any actions conflict, the player must dice their initiative against a (10 + Monster's Init. Modifier) DC in order to get his action off first. If the sequence of actions is obvious (i.e. ranged attack versus melee attack), no dice are needed.

This nicely mirrors Robert Fisher's advice, and keeps the actions of opponents fairly inscrutible. Monsters fall into the greater narrative backdrop, and are struggled against for narrative goals. Such player-facing mechanics ultimately make opponents less like discrete actors, and more part of the rich environment.
Posted by E at 4:12 PM